Sunworks, Inc. today announced financial results for the quarter and nine months ending September 30, 2016.
Q3 and year to date 2016 Financial Highlights:
- Total revenue for the third quarter and first nine months of 2016 of $17.6 million and $68.0 million, respectively. Year-to-date revenue increase of approximately 87% resulting from acquired businesses and strong organic growth. Third quarter 2016 revenue declined from the prior year level due to the timing of installations, which pushed recognition of revenue from third quarter 2016 revenue to fourth quarter 2016.
- Gross margin for the third quarter and first nine months of 2016 of 27% and 29% respectively, compared to 27% and 29% in the respective periods of the prior year. Current year gross margins were stable and reflect investments that are expected to enhance revenue and improve profitability in future quarters.
- Net loss for the third quarter of 2016 of $6.1 million and a net loss of $5.7 million year to date 2016, versus net income of $1.4 million and a net loss of $123,000 on the comparable year ago periods. The current year loss results include sales and marketing investments as well as $3.9 million in non-cash charges related to the issuance of stock-based compensation.
- Backlog of $42.7 million as of September 30, 2016, representing an increase of 31% compared to the third quarter of 2015.
Jim Nelson, Sunworks Chief Executive Officer commented, "Our sales have increased nearly 90% in the first nine months of this year demonstrating our increasingly strong position in the solar market. We continue to invest in our business and are experiencing momentum in expanding our addressable market. We also strengthened our board of directors, our management team and enhanced our organization so that we can more effectively scale our business and capitalize on growth opportunities. During the third quarter, we doubled the size of our commercial sales team by investing in a world-class, experienced sales group with a proven track-record to drive sales. We also made investments to license Sunworks in new markets, added experienced professionals to penetrate new vertical end- markets, joined associations that directly influence markets we serve, and again invested in equipment, personnel and systems that are critical to support our accelerated long-term growth strategy. Although these investments negatively impacted our profitability during the third quarter of this year, we are confident that they are part of a foundation that will drive continued robust growth and market share gains in the future."
Mr. Nelson continued, "We introduced our new Chief Financial Officer, Paul McDonnel, who has quickly acclimated himself to his new position, demonstrated leadership amongst the team and identified process and controls necessary to scale our business . In addition, we welcomed Charles Cunningham as a Managing Director, to expand our business into the Federal markets, further diversifying our business model and providing considerable opportunities for incremental future growth. We also continue to strengthen our board of directors, having added Charles Cargile, who brings a wealth of experience in financial and operational leadership, as well as Rhone Resch, the former President and CEO of the Solar Energy Industries Association. I am excited to add these quality leaders to our team and am confident they will enhance our drive for increasing shareholder value."
Third quarter 2016 summary
Revenue for the three months ending September 30, 2016 was $17.6 million, compared to $19.7 million in the three months ending September 30, 2015. The decrease was primarily a result of approximately $15 million of projects which were expected to be completed in the third quarter, shifting to the fourth quarter and into 2017.
Mr. Nelson commented, "The fundamentals of our business remain strong, and we are well positioned to capitalize on a growing number of residential and commercial opportunities in the fourth quarter, including the commercial sales that slipped out of the third quarter. These orders remain in our backlog, and we are confident that they will benefit revenues in future quarters This timing issue also impacted our expenses, as we incurred materials costs and other implementation related expenses of these projects in the third quarter."
Sales to the commercial and agricultural markets represented approximately 12% of total revenue with the residential market at 12% in the third quarter.
Gross profit was $4.7 million, or 27% gross margin, for the three months ending September 30, 2016 compared to $5.3 million, or 27% gross margin, in the quarter ended September 30, 2015.
Net loss for the third quarter of 2016 was $6.1 million, or ($0.29) per basic and diluted share, for the three months ended September 30, 2016 as compared to net income of $1.4 million or $0.08 per basic and ($0.01) per diluted share for the corresponding quarter of 2015.
Adjusted EBITDA for the third quarter of 2016 was a loss of $1.9 million. This compares to Adjusted EBITDA income of $1.7 million in the third quarter of 2015.
Year-to-date 2016 summary
Revenue for the nine months ending September 30, 2016 increased 87% to $68.0 million, compared to $36.4 million in the nine months ending September 30, 2015. The increase was due in part to strong organic growth in commercial and agricultural markets.
Gross Profit was $19.8 million, or 29% gross margin, for the first nine months of 2016, compared to $10.7 million, or 29% gross margin, for the first nine months last year. Year-to-date net loss was $5.7 million, or $(0.29) per basic and diluted share, compared to a net loss of $123,000, or $(0.01) per basic and diluted share, for the same period last year. Adjusted EBITDA for the first nine months of 2016 was $1.0 million, inclusive of $5.8 million in non-cash stock-based compensation. This compares to $1.0 million in the corresponding period in 2015.
Balance sheet
- The company had $6.1 million in cash and cash equivalents as of September 30, 2016
- As of September 30, 2016, the company had $570,000 of debt outstanding, exclusive of convertible debt
Backlog
Order backlog, based on signed orders from customers, on September 30, 2016 was $42.7 million, representing an increase of nearly 48% from the corresponding quarter in 2015. 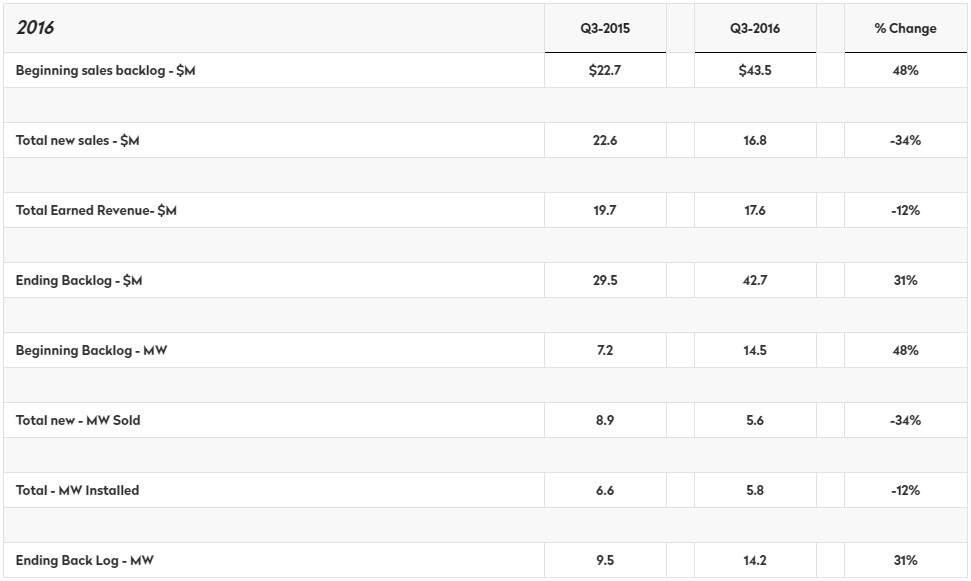 Guidance
Management expects to achieve strong revenue in the fourth quarter of 2016 culminating in full year revenue in the range of $95 million to $105 million. This annual guidance has been reduced from the previous guidance of $110 million to $115 million. In addition, management expects to return to profitability on a quarterly basis in the fourth quarter of 2016.
Commenting on the fourth quarter and 2017, Mr. Nelson said, "We continue to advance our reputation in the industry as leaders in quality, service and value. Our organizational enhancements as well as the investments we are making will enhance our ability to capture the significant growth opportunities we have identified. We are confident that we will end 2016 on a high note and are increasingly excited about our outlook for 2017."
Adjusted EBITDA
The following is a non-GAAP measure of cash flow, or adjusted EBITDA, which adds back non-cash items including stock based compensation and interest expense as a result of beneficial conversion feature of convertible notes plus cash interest and taxes.
제공: Sunworks
위 기사에 언급한 회사들의 ENF 프로필