Hanwha Q CELLS Co., Ltd. today reported its unaudited financial results for the three months ended March 31, 2015.
First Quarter 2015 Hightlights
- Revenues increased 54% year-over-year to US$333.5 million
- Shipments totaled 547.3MW
- Gross profit rose 70% year-over-year to US$48.4 million
- Gross margins reached 14.5%
- The Company incurred a one-time US$22.1 million restructuring charge
- Excluding the restructuring charge the Company generated positive operating profit of US$4.8 million and pretax income of US$4 million.
Mr. Seong-woo Nam, Chairman and CEO of Hanwha Q CELLS commented, "We are pleased to announce our results for the first time as a new company following our strategic merger with Q CELLS. Since the acquisition was closed in February and we incurred one-time charges totaling US$22.1 million related to the acquisition, the first quarter financials do not fully represent the business after the acquisition. The newly formed Company had substantially higher revenues of US$334 million and total shipments of 547.3MW than the predecessor entity, Hanwha SolarOne, on a standalone basis. Profitability was improved immediately with gross margins approaching 15%, and we returned to pre-tax profitability excluding the aforementioned one-time charges. We are in the early stages of reducing redundant costs and realizing our economies of scale in areas like supply chain management. Our improved brand and product features resulting from the merger allowed us to maintain a higher Average Selling Price (ASP) than would have been achieved by the former entity."
Chairman Nam continued, "We have a well-balanced geographic mix of customers including the EA (Europe and certain emerging markets) representing about one-third of our shipments, followed by Japan at nearly 25% and North America totaling 20%. We experienced good demand in the UK and Japan in particular ahead of incentive adjustments in each country, and our ability to deliver modules 'tariff free' to the US has boosted our competitive position in that market. China remains a market with enormous potential, although we chose to approach selectively near-term as pricing and credit terms stabilize."
"A number of manufacturing initiatives are underway. We have upgraded the equipment at our ingot/wafer plant in China, with high utilization and stabilized production. We will continue to reduce costs at this facility. All cell lines at our Malaysia facility are actively being converted to manufacture our next generation cell Q.Antum. We have largely completed the conversion of all module lines in our Qidong, China plant to full automation and are experiencing a 30% improvement in productivity. Our first new module line in Korea, with annual capacity of 250MW, is currently ramping up and the second line of 250MW capacity is scheduled to commence operations in September. The new module Fab in Malaysia is under construction and scheduled for mass production beginning in October. We are evaluating additional cell and module capacity additions this year."
The outlook for the remainder of 2015 remains robust. The Company targeted annual shipments between 3.2 and 3.4GW and expect blended ASPs to stabilize at current levels. Gross margins for the full year 2015 should range from 16% to 18%. The Company's priorities for the remainder of 2015 can be summarized as follows:
- Continue to integrate the Q CELLS acquisition, reducing redundant costs and leveraging increased scale and geographic breadth;
- Complete our scheduled capacity additions on time and on budget;
- Continue to reduce production costs;
- Increase market share by improving product quality and performance;
- Accelerate our downstream development;
- Improve our capital structure and fund new growth; and
- Return to consistent profitability and enhance shareholder value.
Chairman Nam concluded by noting, "The benefits of our recent acquisition with Q CELLS were quickly validated in April when we signed the largest solar module agreement in the history of our industry, at more than 1.5GW over a five quarter period beginning in 4Q15. Our agreement with the largest US renewable energy company, NextEra Energy Resources, provides us strong visibility for the foreseeable future and greatly improves our potential profitability and growth. Our ability to ship tariff free modules in scale to the US, provide a high-efficiency module equipped with our innovative Q.Antum cell architecture, and the stability and longevity provided by our parent Hanwha Group, a Fortune Global 500 company, provided a powerful competitive advantage."
First Quarter 2015 Results
- The income statement for the three months ended March 31, 2015 is consolidated.
- The income statement for the three months ended March 31, 2014 is for Q CELLS (the acquiring company from an accounting perspective) only.
- The consolidated balance sheet for March 31, 2015 is consolidated.
- The balance sheet for December 31, 2014 is for Q CELLS only.
- The acquisition of Hanwha Q CELLS Investment Co., Ltd. and its subsidiaries ("Q CELLS") is accounted for in accordance with ASC Topic 805, Business Combinations ("ASC 805"). For accounting purposes, the acquisition is treated as a "reverse acquisition" and Q CELLS is determined as the accounting acquirer. Consequently, the financial information of Q1 2014 and December 31, 2014 only reflects the historical consolidated financial statements of Q CELLS and does not include the historical financial statements of Hanwha SolarOne Co., Ltd. Upon the consummation of the acquisition on February 6, 2015, Q CELLS applied purchase accounting to the assets and liabilities of Hanwha SolarOne.
For additional Company information and full-year 2014 pro-forma financials see the F-3 Registration Statement filed with the SEC on April 30, 2015. Following the acquisition the merged company's name was changed to Hanwha Q CELLS Co., Ltd. and the trading symbol was changed from "HSOL" to" HQCL".
Total net revenues were US$333.5 million, an increase of 54% from US$217 million in 1Q14. This increase in total net revenues was primarily due to higher shipments resulting from the Q CELLS acquisition, somewhat offset by lower ASPs.
PV module shipments were 547.3MW, of which 33.9MW were to the company's own projects. Total shipments are 35-40% higher than recent quarters for the pre-merger company Hanwha SolarOne. 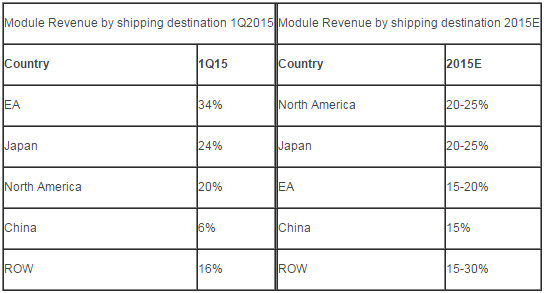 The table above left reflects the geographic diversity of the Company's business, as well as its presence in the world's largest markets. For the 1Q, the EA region (which includes the EU and a number of emerging markets like Africa and Latin America) accounted for 34% of the Company's total shipments. The UK, now Europe's largest solar market, was particularly strong ahead of incentive changes. The Company remains one of the top suppliers to Japan, a fast-growing market that represented 24% of its shipments going to that country. Its ability to ship modules from Malaysia (and soon Korea) tariff- free into the US has bolstered its competitive position there as its business in North America grew to represent 20% of its shipments. China will clearly be the world's largest solar market in 2015, with the second half of the year particularly strong. The Company expects to increase its China business from the current 5% level as the year progresses. The rest of the world (ROW) accounted for 16% of its shipments as the Company continues to penetrate new and growing markets.
The average selling price of modules reached US$0.59 per watt, influenced positively by improved brand recognition and product quality resulting from the Q CELLS acquisition.
Gross profit increased to US$48.4 million from US$28.5 million in 1Q14. The increase in gross profit in 1Q15 was primarily due to higher revenues and an improved cost structure.
Gross margin improved to14.5%from 13.1% in 1Q14. The improved gross margin is the result of higher utilization of manufacturing facilities and reduction in processing costs.
Total processing costs are approaching US$0.46 per watt with little difference between using its own wafers and purchasing wafers. The Company's cost structure improved in light of increased utilization and improved manufacturing efficiencies at its ingot and wafer production facilities, lower polysilicon costs, increased automation, and new product lines that use fewer raw materials. The Malaysia facilities acquired from Q CELLS manufacture cells at costs well below industry averages.
The Company encountered a one-time restructuring charge of US$22.1 million, resulting from its decision to relocate higher cost German production acquired from Q CELLS to more economical regions.
Operating loss was US$17.3 million, compared with an operating loss of US$1.6 million in 1Q14. Operating income excluding the restructuring charge for 1Q15 would have been US$4.8 million and operating margin would have been 1.4%.
Operating expenses (excluding the restructuring charge) as a percentage of total net revenues fell to 13.1% from 13.9% in 1Q14. The Company expects to improve this ratio over time as it benefits from its larger and growing revenue base and from the potential to eliminate redundant expenses post merger.
Net interest expense was US$10.9 million, compared with US$4.8 million in 1Q14.
Pretax loss was US$18.1 million as compared to a pretax loss of $US10.7 million for the comparable period a year ago primarily as a result of the restructuring charge. Pretax income for the 1Q15 would have been positive US$4 million excluding the restructuring charge.
The Company recorded a net gain of US$9.1 million, which included both a foreign exchange gain and a gain from the change in fair value of derivatives in hedging activities.
Net loss attributable to shareholders on a GAAP basis was US$20.4 million, compared with net loss attributable to shareholders of US$7.2 million in 1Q14.
Net loss per basic ADS on a GAAP basis was US$0.03, compared with net loss per basic ADS of US$0.01 in 1Q14, on a 8.3% increase in average shares outstanding to 801,143,738.
Financial Position
As of March 31, 2015, the Company had cash and cash equivalents of US$194.5 million. Total short-term bank borrowings (including the current portion of long-term bank borrowings) were US$621.1 million as of March 31, 2015. As of March 31, 2015, the Company had total long-term debt (net of current portion and long-term notes) of US$491.8 million. The Company's long-term bank borrowings are to be repaid in installments until their maturities, which range from one to three years. The Company's long-term notes are to be repaid within one year.
Net cash used in operating activities in 1Q15 was US$29.2 million. As of March 31, 2015, accounts receivable were US$308.5 million. Day's sales outstanding ("DSO") were 94 days in 1Q15 and benefit from Q CELLS very low receivables balance pre-merger. As of March 31, 2015, inventories totaled US$402.4 million. Day's inventory was 96 days in 1Q15.
Capital expenditures were US$18 million in 1Q15.
Capacity Status
As of March 31, 2015, the Company had production capacity of 950MW for ingot and wafer, 3.5GW for cell and 2.8GW for module. The Company plans to expand cell and module capacities to at least 3.7GW and 3.7GW, respectively, by the end of 2015.
Business Outlook
The Company provides the following guidance based on current operating trends and market conditions.
For the second quarter 2015 the Company expects:
- Module shipments of 650MW to 680MW
- Gross margins of 15% to17%
For the full year 2015, the Company expects:
- Module shipments to be between 3.2GW to 3.4GW
- Gross margins between 16% and 18%
- Capital expenditures of US $200 million largely for cell and module capacity expansions and manufacturing technology upgrades
제공: Hanwha Q CELLS
위 기사에 언급한 회사들의 ENF 프로필